39. INTERNAL COMPLAINTS COMMITTEE (ICC)
Gender Sensitization Committee against Sexual Harassment-GSCASH
Creation of the Committee
The committee was established as per Section 4 All India Council for Technical Education
(Gender Sensitization, Prevention and Prohibition of Sexual Harassment of Women
Employees and Students and Redressal of Grievances in Technical Institutions Regulations,
2016 vide No. F. AICTE/ WH/ 2016/ 01 dated 10th June, 2016. The committee will act as a
dedicated task force which can constantly monitor the existing (security) arrangements and
suggest additional security measures to be put in place. It also organizes workshops and
sensitization programs both for staff and students by eminent Psychologists and social
workers. The committee also addresses similar kind of issues on various occasions like:
Women’s day, Mothers Day, etc. Internal Complaints Committee will examine all matters
relating to women in the workplace and will make suggestions and proposals to the institute
administration regarding such matters.
Objectives
 To create and maintain safe, healthy and supportive environment for women and girl
students in the campus.
 To address issues faced by women at work place and to organize awareness
generation programmes and to take preventive steps towards protection of women
staff / female students from sexual harassment in the college.
Functions of ICC
o Publicly notify the provisions against sexual harassment and ensure wide
dissemination
o To be included in the website, prospectus, display at conspicuous places / notice
boards the penalty and consequences of sexual harassment and create awareness
in the institutional community on the mechanism put in place. Display the details
of members of ICC, complaints procedure, etc.
o Organise Training Programmes to sensitize all the stakeholders on rights,
entitlements, and responsibilities enshrined in these regulations.
o Organize regular orientation programmes to the members of ICC to deal with
complaints, steer the process of conciliation, etc. with sensitivity.
o Ensure to implement procedures that safeguard the students and staff from being
vulnerable to sexual harassment / humiliation / exploitation.
o ICC shall have the following composition (by maintaining atleast one-half of the
total members of ICC being women) :
 Presiding Officer – A women faculty employed at a Senior Level (not below
Associate Professor) nominated by the Executive Authority (Head of the
Institution)
 Two faculty members and two non-teaching faculty who had experience in
social work or have legal knowledge, nominated by the Executive Authority
(Head of the Institution)
 Three students (comprising of at least one girl student) of Pre-Final/Final year
at Undergraduate/ Diploma Level Institution, as the case may be.
 One member from amongst Non-Government Organization.
 Persons in senior positions such as Chairman/ Secretary of the Society,
Principal/ Director of the Institution, etc. shall not be the members of the ICCs
in order to ensure autonomy of their functioning
 The term of office of the members of the ICC shall be for a period of three
years. Or one-third of the members of the ICC may change every year.
 All Technical Institutions approved by AICTE shall upload the Annual Report
containing the following details by 30th June of the Calendar Year:
SMGG Committees: Draft-3
Page 79 of 79
 Number of complaints of sexual harassment received in the year
 Number of orientation or training Programmes carried out for the
members of the ICC to deal with complaints
 Number of complaints disposed of during the year
 Number of cases pending for more than 90 days
 Number of workshops or awareness Programme carried out for the
officers, functionaries, faculty and students to sensitize them against
sexual harassment
 Nature of action taken by the Technical Institution against the perpetrator
Selection Procedure
The Institute‟s Executive Council in consultation with Heads of the Departments selects the
members of this committee.
Roles and Responsibilities
[The roles and responsibilities listed here are only indicative, but not exhaustive. The IQAC Team
reserves rights to Edit/ Append / Delete any part or all of these roles and responsibilities from time to
time and as required for compliance with the IQAC criteria]
The Internal Complaints Committee shall
 Provide assistance if an employee or a student chooses to file a complaint with the
police.
 Provide mechanisms of dispute redressal and dialogue to anticipate and address
issues through just and fair conciliation without undermining complainant’s right,
and minimizes the need for purely punitive approaches that lead to further
resentment, alienation or violence.
 Protect the safety of the complainant by not divulging the person’s identity, and
provide the mandatory relief by way of sanctioned leave or relaxation of attendance
requirement or transfer to another department or supervisor as required during the
pendency of the complaint, or also provide for the transfer of the offender.
 Ensure that victims or witnesses are not victimized or discriminated against while
dealing with complaints of sexual harassment.
 Ensure prohibition of retaliation or adverse action against a covered individual
because the employed or the student is engaged in protected activity. 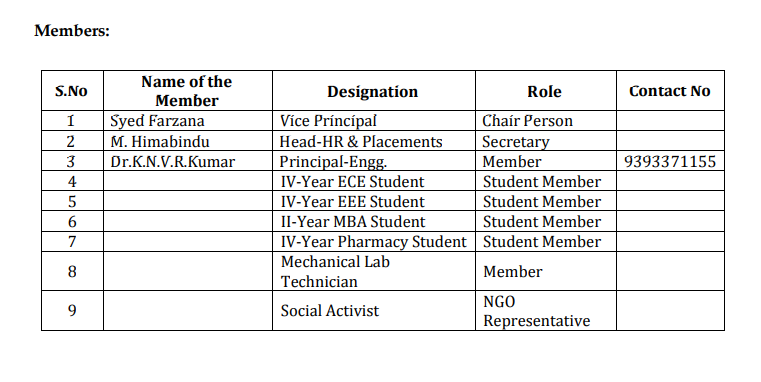